Does anyone know what piece of technology revolutionized backgammon? Picture a time so remote that assigning it a date would serve no useful purpose. Imagine a troglodyte, toiling in his lonely cave. Gnawing absently on the shank of a sheep (the tallow waxing his matted beard), he grunts in concentration. He seeks to invent…something. Fire, the wheel, papyrus, or perhaps a Maytag washer. Anything that will change the course of history. Finally, he has it. He holds up a curious object. It is a rectangle of stiff paper, with triangular symbols stamped like mystic runes upon it. Yes, it’s the young Larry Strommen, and he has just invented the position card! (I am not sure that Larry invented the position card, but I buy all mine from Larry, so I thought I would give him a plug.)

I take these cards and record interesting positions. Thousands of them. On the back I record pertinent data: history, players, rollouts. Then, I throw the cards in a huge paper bag, stored under my bed, where they have turned into compost. Friends, like Paul Franks, are always saying to me: “You know what kind of book people want to read? A problem book with lots of positions. I love those. Forget that “Fish” stuff. No one wants to read it. I only read the pages with my name on them, anyway! Take those little cards of yours and do a problem book.” Sorry, Paul. I don’t go into that bag without Kevlar body armor and tranquilizer darts. God knows what sort of dangerous mutant things are growing down there, but most nights I see emergency vehicles, mars lights flashing, zipping around under my bed. (I should switch to O’Doul’s). Fortunately for Paul, someone else went ahead and wrote one.

Hal Heinrich, the World Champ from Calgary, has, instead of positions, collected entire matches. He stores them away in a “data base”, which is the micro-chip equivalent of the paper bag under the bed. By now no one knows what festers there, but reliable rumor has it that seven or eight of the top rated players on FIBS are actually computer viruses spawned in Hal’s cyber-swamp.

Hal collaborates with famed player/author/analyst Kit Woolsey. Kit is one of the finest games players in the world. In addition to his accomplishments in backgammon, he is a world class bridge player (and writer – his MATCHPOINTS is rightly regarded as a classic), and a top blackjack player. In an article on the “ten best gamblers in the world” Kit’s name was second. He is only a mediocre player at “Settlers Of Catan”, but no one is good at everything.

Together they have done a series of annotated matches for book and computer. Their latest effort, NEW IDEAS IN BACKGAMMON, arose from their research. The other great technical advance in backgammon, almost as incredible as the position card, is JellyFish. JF’s creator, Fredrick Dahl, has provided Hal and Kit with a version of Jelly that rolls out entire matches. The program flags plays whenever it “thinks” the player has made a play significantly worse than the one Jelly prefers. When Hal and Kit found that they, too, missed Jelly’s recommended play, they decided the position merited study. After elaborate screening, including submitting several hundred plays to a panel of experts, they collected the 104 problem positions treated in their new book. The positions are grouped into seven chapters, each problem in the chapter relating to that chapter’s theme.

The format is simple, with all the best features of a problem book, and a few new, good features all its own. Each position is pictured, then Kit devotes a page or two to describing the candidate plays, and discusses their possible strengths and weaknesses. Then, the best play is shown in diagram, with a follow-up discussion of why that play wins out. In an appendix, the rollout results are given for all plays, along with an indication of which plays the panel chose, and what play was done over the board.

The problems are tough. Here are problems 81 and 82 from the chapter “Scrambling Home”. They have something in common. Can you guess what? 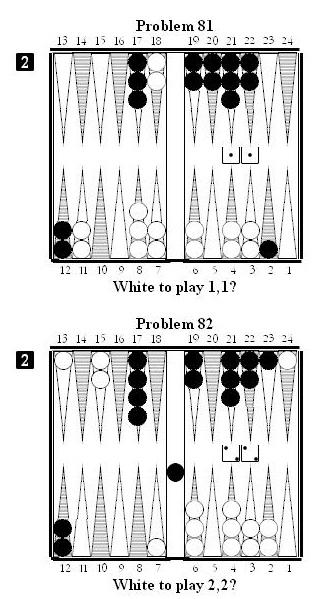 I warned you they were hard. The common element is the importance of the five point. If you want to take another minute to rethink your plays, go ahead before I give the best plays, and summarize the explanations.
Only one of the panelists chose to hit by switching points in problem 81. Good, because switching is very wrong. Most found individual solutions to the problem of builder deployment. Three found the best possible deployment of builders: put two men right on the five point with 7-5 . Kit’s explanation is that this is not a priming position, it is an attacking position. Build the five, then go after Black’s blot.

Almost to a man, the panel selected 13-7, 4-2 in problem 82. Only the original player tried the craven 15-13 , 7-3. The best play is 15-11 . One panelist actually chose that. Kit’s explanation is that without the five point, the bar point is not effective. The five can’t be built this turn, so the best alternative is the play that exerts the most “control” over the five-point. Building the eleven point does that.

I like to imagine these problems arising in a consulting chouette. I think I might, depending on current climate conditions, choose to make the five-point in problem 81. I further think I might convince my chouettemates to go with that play. I would not have chosen to make the eleven point in response to problem 82, and I am damn sure I could never convince my mates in any chouette to go along with it, even if I had access to NEW IDEAS and could read them the proof of its rightness.

Is this solution right? I think so. The authors devote the introduction to a detailed explanation of their rollout methods. They succeeded in convincing me that most of the plays in the book are probably right, and right by a lot. They concede that there may be a few that slipped through the cracks, but in all likelyhood, this book’s recommended plays are as accurate as the recommendations of any problem book published.

There are two other matters that do trouble me. First, although cube locations appear with the diagrams, we are told to ignore the cube. This does not mean that the plays given are the best play at double match point, it means that we have to ignore a factor that may override all other considerations. Also, no match score is ever given. 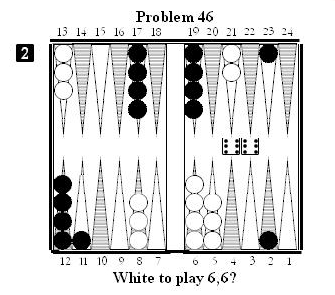 The difference in expected value between the “best” play, 21-15 , 8-2x, and the chosen play, 21-9 , is .110. This is a HUGE amount. Pointing wins nearly twice as many gammons. What if the score happened to be 7-8 to 9, post-Crawford? Now, the player’s original choice of making the 9 point would be correct, as it wins about 5% more games than its aggressive counterpart. For that matter, does the expected value correspond with the depicted cube location in all cases? We are not told. JellyFish rollouts provide data for all four possible locations of the cube, but the book provides only one set for each problem, and never specifies just which of the four it is.

The second flaw has to do with Kit’s analysis. Most writers attack a problem with math, or logic, or rollout data. Their aim is to show that a particular move is right. Kit’s approach has always been to explain the approach that should allow YOU to arrive at the correct answer. Generally he arrives at his answers through “induction”, building argument upon argument till he has constructed a solid case. This time, he has to use “deduction”. He is looking at JellyFish’s answer and finding ways of dismissing the alternate plays until only Jelly’s choice remains. If he had tried to go both ways, first building his case, then, when his choice differed from Jelly’s (and according to the introduction that should have been at least half the time), explained why he had fallen into error, the book would be even stronger.

The above complaints aside, this book more than lives up to its billing. I would not recommend it to beginners. Kit’s style is clear enough that they will easily grasp his arguments, but beginners need to ground themselves thoroughly in the basics, to master and memorize the rules. This book will fill their heads with exceptions. For everyone else, from advanced intermediate to expert, the book is a must-read. The more expert you are, or hope to be, the more certain it is that you need a copy of this one on your shelf.