If you saw Mike Corbett walking down the street with his flowing white hair and casual attire, you might think he’s some displaced California surfer dude who somehow landed in Ft. Lauderdale. Or if you know the South Florida scene, you’ve probably seen the Florida version of the California Surfer Dude—the Florida Sail Board dude.

But don’t be fooled by appearances. What you are really looking at is a man who is provably one of the most intelligent and fiercely competitive people you have probably ever met.

Those of us who know what it takes to become a top backgammon player already recognize Mike’s brilliance in that arena. Not only does he take on and often beat many of the best players in the world and get listed year after year as one of the Giants of Backgammon, but if you have read his book or attended any of his lectures, you will know that he also takes on the Gods of Backgammon—the bots.

Mike has taken great joy in showing that, as great as the bots are in most cases, they simply don’t (yet) have the intuition and insights of a top backgammon player. I personally have collected many positions that Mike has used in his lectures to show just how much better a human is than a bot in complicated situations such as back games, mutual holding games, games that require complicated trap plays to have the greatest chance to win, and even some more basic positions.

How many people out there have the confidence to take on the bots? Some might say this is arrogant and cocky, and I can assure you that Mike has been called those things and worse. But those negative terms are correct to apply to someone who is overly confident or excessively sure of himself when he should not be. In Mike’s case, his confidence is warranted, and he is always ready to put his money where his mouth is with a prop or bet.

In recent years, Mike has done much more than just put his money where his mouth is. For some reason, he has not only continued to hone his skills to clobber his opponents whenever possible (as he did in the recent Las Vegas tournament, crushing everyone in his path including the great Malcolm Davis in the finals), but he has been doing much to share his wisdom with his fellow backgammon players.

In addition to his insightful lectures at many tournaments around the country, he has been writing articles at GammonVillage, and you will often see Mike over the board with several people gathered around listening to his amazing insights on complicated checker and cube decision. I, myself, have paid the price to play with Mike for money, and was happy to donate in return for his generosity in sharing his thoughts about the game with me. 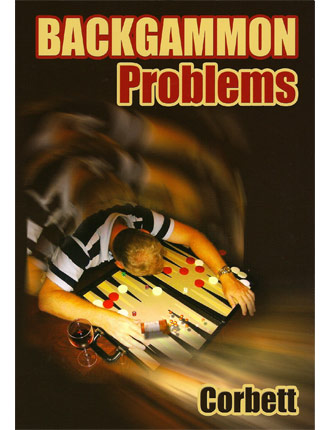 In addition, Mike has taken up writing. I am sure his girlfriend of 19 years, Danielle, had much to do with this in helping him organize and edit, but his books are terrific. His backgammon book not only provides insight in that area, but gives us very interesting vignettes and some new terminology that is not only fun, but will help you understand the game better. If you don’t know about the “Cinderella Point,” you need to read his book, Backgammon Problems. (You can buy the book from Carol Cole at the Backgammon Boutique.)

By the way, Mike has many interests outside of backgammon as can readily be seen in his second book, Laughter of the Damned. This book is a great read that will provide many fun insights into human behavior, and it clearly illustrates Mike’s great love of words and interesting insights into the use of the English language. (You can buy that book directly from his web site: www.mikecorbettbooks.com)

I mentioned his love of the language. Don’t play Mike Scrabble or you will find yourself in big trouble. When he played competitively, he had a 4-digit ranking, and that’s scary.

Are you getting the feeling Mike is more than just another backgammon player? A writer, lecturer, great Scrabble player, and he also finds time to play tennis regularly at a level that will amaze you. In short, there’s nothing Mike does casually. He works hard to be good … to try to be great … at whatever he does.

Now, most of you are reading this because you are interested in Mike as a backgammon player, so for the record:

Art Benjamin, a Player You Can Count On

Art Benjamin, a Player You Can Count On Professor Art Benjamin serves on the U.S. Backgammon Federation Board of... read more

It’s been a significant ambition to hold a UK / US team match. However, for a real-world event you... read more

Tournament backgammon requires an extra set of skills beyond those required by money players. Often decisions have to be... read more

Coming from a traditional tawla background, Toni has quickly adapted his skills into the modern backgammon standards, and soon... read more

Coolrey Fogerlund is No. 1 in U.S.A Interviewed by Phil Simborg Ray Fogerlund came in third at the ABT event in LA.... read more

Masayuki Mochizuki, or "Mochy" as we know him, won the 2009 World Championship in Monte Carlo, defeating Lars Trabolt... read more