The Rollout Team: Darin Campo, Miran Tuhtan, Misja Alma, Mislav Radica, Neil Kazaross, Robby, and Stick and those who helped him with the opening moves and replies rollouts. 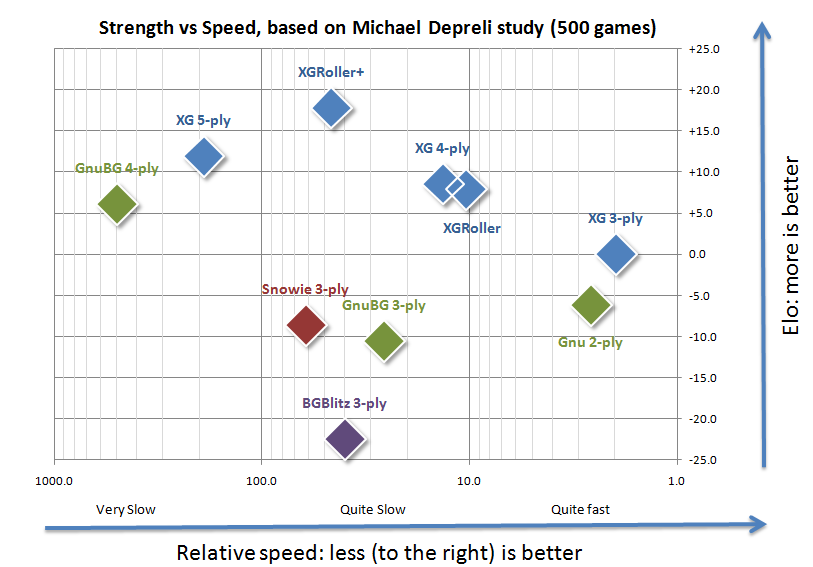 Note: Speed test was done by Xavier on a core i7-920 processor. A different processor might produce different relative speeds.

Daniel Murphy: Interesting that Gnu BG 4-ply (ER 0.755) ranks nearly as high as XGR (ER 0.705) (but is much, much slower) and, although both Gnu BG 2-ply and Gnu BG 3-ply performed much worse than that, if a row were added for Gnu BG using 2-ply for cube decisions and 3-ply for checker play, that combination would rank nearly as high as eXtreme 3-ply. No idea how that combo would fare in the speed vs. strength table).

Christian Munk-Christensen: What was the final score (which bot won and by how much)?

Xavier Dufaure de Citres: All speeds are based on the analysis of two sessions (one money session and a 25-point match). One exception is BG-blitz where the speed was determined based on rollout speed compare to XG’s. It is important to point that speed depends greatly of the processor used. Snowie is single-threaded, this means it can only use one core of your processor, while all the other programs will use all the cores/threads available. I used my core i7 920 for that analysis, which has four cores and eight threads. Now the speed of Analyze is one thing and speed of Rollout is another. I think the number you were referring are about rollouts. For rollout, yes, XG edge seems to be more than on a plain Analyze of a match.

Frank Raposa, ABT Rising Star In a short time Frank Raposa has become a rising star on the American Backgammon Tour. With... read more

In the Game Until the End: Winning in Ace-Point Endgames DESCRIPTION This book has now been updated in Volume 2 (2014), with some... read more

Ideal Racing Positions by Mike Mannon What does it mean to say that a certain racing position is ideal? Position 1,... read more

Precision dice are not designed to yield more “snake eyes” than standard dice are. Nor are they designed to... read more

The Best Way to Learn and Improve Your Backgammon Game

by Phil Simborg I am writing this article to share with you what I believe to be the best way... read more

Katgammon Special Thanks To Customers

Did you feel too that the past few months have been rough and tough? We have the same feeling... read more