Backgammon has its origins in the early board games developed in Ur of Mesopotamia 5000 years ago. Boards bearing a resemblance to backgammon have been unearthed in excavations along with matching dice and inlaid playing pieces. The game appears to have moved from there to ancient India where it and Parcheesi developed from a common ancestor. A variant called Sennet was played by the ancient Egyptians.

By the time of Plato the board had taken on its now standard form, and as with much else, the Greeks claimed credit for its invention. Sophocles attributed the game to Palamedes who apparently developed it to while away the time during the siege of Troy. Herodatus, on the other hand, claims the Lydians invented it. 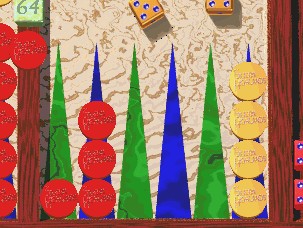 In Rome the game was called ludus duodecium scriptorum, “the twelve line game”, or tabular. Boards excavated from the ruins of Pompeii are identical in form to the modern version. But the Romans used three dice. Although it was referred to as the Game of Emperors, backgammon was clearly as popular among the lower classes as among the patricians. A wall painting in Pompeii depicts a tavern brawl which was sparked by a dispute about the game.

The Roman Legions spread the game throughout the empire. Many commentators maintain that like the customs of reading and bathing, the game, in Europe, failed to survive the fall of the Roman empire. In England, however, the game was played in Saxon times and the Roman name Tables appears in Old English Glossaries of the 8th and 9th centuries.

The game underwent a resurgence during the crusades. It was widely played in Arabia, having arrived there by way of Persia. The Arabs used two dice as opposed to the Roman three and it is this version that spread through the upper classes in Europe. The Church disapproved of the game–probably due to the element of gambling–and periodically attempted to outlaw it. The success of these attempts can be judged by the fact that church leaders had to issue these edicts on the average of once or twice a century throughout the 13th through 16th centuries. One presumes the reformation finally took their minds off backgammon. One of the last such attempts was by Cardinal Wolsey of the court of Henry VIII, who ordered all boards burned in 1526, resulting in a cottage industry for English craftsman of turning out disguised boards in the now familiar book form which can be folded in half with the stones inside and stored in a bookshelf.

The edict did not survive the Cardinal, and backgammon became one of the favorite games of the Elizabethans. By this time the rules of the game, at least in England and France, appear to have been formalized into the modern form, except for the doubling cube. Although the name Tables would be widely used well into this century, in 1645 the name “backgammon” is recorded, and it is clear that with the name the concept of the back-gammon (or back game) had found their way into the game.

By the 18th century the game had been redeemed and became popular among the clergy as a morally uplifting pastime. Hoyle published his treatise on the game in 1743. Having arrived in America almost as soon as the Europeans, backgammon became as popular a pastime in the new world as the old. The expense accounts of Thomas Jefferson show his winnings and losses at the game in June of 1776 when he should have been writing the Declaration of Independence.

Although played on the famous Natchez riverboat, the game lost popularity among the Victorians. It was probably too much fun. It remained popular in the Middle East and Mediterranean however, and then sometime in the 1920s some unrecorded genius added the doubling cube. This sped up the game, added an extra element of risk, and demanded new levels of strategy and skill. The popularity of the game surged in the twenties and thirties. Throughout the United States and Europe, club and tournament play developed. The game has continued in popularity throughout the last half of the twentieth century and with the development of Bob’s Backgammon, we modestly claim that it has joined the computer age.

Tournament Backgammon Rules and Standards Guide   The purpose of this Guide is to bring clarity and definition to the rules... read more

Paragliders play backgammon while high in the sky | Watch Video

The British Backgammon Awards 2020 – get your nominations in!

Nominations are now open for the British Backgammon Awards 2020 Sadly if there was an award for it, COVID-19 would... read more

US Backgammon Champion 2010 What are the odds that the same player would win a seat at a backgammon championship in an... read more