Tournament backgammon requires an extra set of skills beyond those required by money players. Often decisions have to be made which cannot arise in a money game. Here’s a good example. 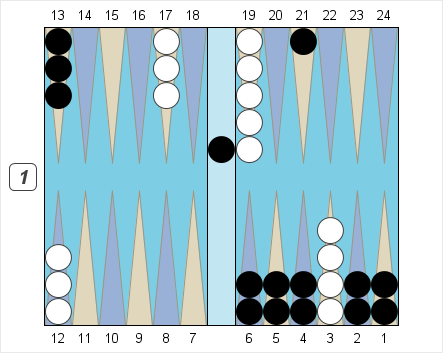 This position arose in a Monte Carlo match some years ago between two top players. Black had been playing for a gammon with four of White’s men on the bar. In the nick of time, White entered all four men with 3-3, in the process sending one of Black’s checkers to the bar. Note that this position with a centered cube could only arise in a tournament; in a money game, Black would have doubled at a much earlier stage of the blitz because of the Jacoby Rule.

The resulting position engendered some speculation among experts. Perhaps, said some, Black was too conservative in doubling; he should take another roll for the gammon, since White might have to expose a blot next turn. A few bold souls (myself included) argued that the position might already be a take. After all, Black has five checkers to bring around and White might be able to build up his board from the low points while waiting for a possible winning shot. Others argued that the play has been correct and double-pass was the proper outcome.

The players engaged in a prop for a while which indicated that the position was certainly not too good, and passing might be right. Later computer rollouts showed it to be, in fact, a close pass. Any improvement in White’s game over the current position yields a clear take. White can’t afford to hit loose inside his board until he makes some additional points. By that time, however, Black’s men have usually escaped to the relative safety of the 10, 11, and midpoints. Even so, White can win about 1/3 of the time, but the occasional hit costs him just too many gammons to take.

Frank Raposa, ABT Rising Star In a short time Frank Raposa has become a rising star on the American Backgammon Tour. With... read more

Coming from a traditional tawla background, Toni has quickly adapted his skills into the modern backgammon standards, and soon... read more

Are the dice rolls random?

Many players have certain doubts about the fairness of Ariston BackGammon. Some people suggest the program actively cheats by manipulating... read more

Paragliders play backgammon while high in the sky | Watch Video

Masayuki Mochizuki, or "Mochy" as we know him, won the 2009 World Championship in Monte Carlo, defeating Lars Trabolt... read more