This book has now been updated in Volume 2 (2014), with some additional new materials, some new positions, and the benefit of XG rollout analyses that were not available in the early 1990s. Most readers, if they were only going to read one book, would opt for Volume 2; however, some might well wish to have both volumes to have a comparative history in the growth and development of the analytical and technical aspects of the game.

“An analysis of run-off-backgammon vs. stay-for-the-last-shot problems. Very accurate, very limited practical use. Definitely not your first, second, third, or fourth backgammon book. Those that want it know who they are.”—Jeremy Bagai, February 1996 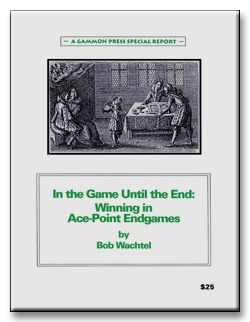 Born just too late to participate in the ultra-cool Beatnik culture that flourished in his native New York in the early 1950s, Bob Wachtel adolesced in philosophical solidarity with that great hipster poet and railed against authority, Bob Dylan. The “radical” persona he displayed by imitating his namesake indeed lent Bob some provisional credibility among the naive counterculturalists in the chaotic, drug-addled “youth revolution” that was soon to surface; but he proved unwilling to adapt to the chilly economic realities that dispatched that daydream so mercilessly. Continuing to raise an angry fist against the demonic specters, Responsibility, and Conformity, Bob remained one of the few Boomers who didn’t “get it,” all through the self-creating Seventies and the “help yourself” Eighties.
Apparently indifferent to the considerable wealth that his better-adjusted contemporaries have amassed, he has pursued a series of arcane and unremunerative projects, of which this monograph is typical.
Bob currently lives within an easy commute of the eccentric community of Venice Beach, California, where he regularly joins a handful of fellow zealots in playing an exceeding rare racquet sport, called “Paddle Tennis.” He maintains that his status within this cult, as a solid “B” player, is no longer challenged.

British Backgammon Awards 2020 – The Results! Many thanks to everyone who voted in this year’s Awards – a record... read more

With Backgammon Player's-Jess Danielsen I was born in 1974 in Denmark, and I started playing online backgammon in 1998. I... read more

Mathematicians look at the world a bit oddly. We are interested in obscure things, we derive great satisfaction from... read more

Doubling Cube Strategy Many beginning and intermediate players play like they're afraid of the doubling cube. They will almost never... read more

By Joy Lee Barnhart From the online manual for Bob's Backgammon Backgammon has its origins in the early board games developed... read more

How to Run a Backgammon Tournament – Crawford 1970

Backgammon, like most games and sports, is easily adapted to tournament play. As a matter of fact, backgammon is... read more