Many backgammon games follow a definable thread from beginning to end. The game plays out more or less as both sides expect, the strategic themes are well understood, and what is required from the players is mostly accuracy of technique. (Not that this is always so easy.)

Sometimes, however, something quite different happens. A game appears to be following a certain course for awhile, then a tactical possibility arises which allows one of the players to wrench the game out of its obvious direction and send it another, and more favorable, way.

These opportunities are, by definition, hard to spot. They can go by quickly, unnoticed by either the players or spectators. Or a player may notice something and think to himself, “Gee, I could try that move. It’s an idea, but—could it really be right? Don’t know. Well, the clock is running, let’s move on. It’s probably a crazy idea anyway.” And the opportunity slips by.

Take a look at this position from the consolation semi-finals of the recent Party Gammon Millions tournament. Lars Trabolt is Black, Kent Goulding is White. 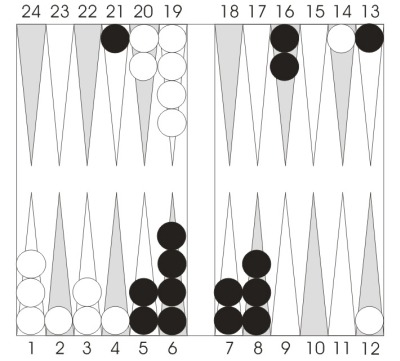 After some early ups and downs, White has succeeded in establishing a 1-3 back game. His chances of timing the game properly are pretty reasonable. He has three extra back men to release, and White only has a four-prime in front of his back checkers, so getting the men into the outfield shouldn’t be too big a problem. His timing isn’t certain, however, because Black also has some men to bring around, and this will take awhile. One quick way to assess the timing in a back game is so simple that many players forget to do it: you can just take a pip count! In this position, Black trails in the pip count by 138 to 218, a difference of 80 pips. In very general terms, a deficit of 90-120 pips signifies a well-timed back game. So White is close to having enough timing, but he’s not quite there yet.

Black, however, has his own problems. Although he’s built a small prime in front of White, it’s not really long enough to prevent White from getting into the outfield eventually. In addition, he built his prime with the wrong checkers, leaving the spares on the 6-point and 8-point now awkwardly placed. (“Wrong” is not used critically; Black built his prime with the rolls he was given. Those rolls didn’t allow him to use his checkers as he would have liked.) Black would be better off if those spares were back in the outfield, ready to make the 9-point and build his prime from the back.

An additional problem, however, is more serious. White is prepared to make a third back game point, either the 21-point or the 23-point, and Black’s 5-3 roll doesn’t look useful for stopping this plan. Back games with three points, like a 4-3-1 back game, are especially strong. If well-timed, they make the back game player a solid favorite.

So what should Black do? The normal play would be something like 21/13. This cleans up all the blots, maintains good outfield coverage, and prepares to get home. The play allows White to make a third back game point with any ace, deuce, or three, but leaves White a little thin on timing. By the time Black gets all his men on top of his prime, it’s likely White will have abandoned one of the back game points. It’s a safe and solid play that still leaves Black a favorite in the game.

Traboldt, however, found something much more ingenious and dynamic. He played the remarkable 7/4*, 7/2*! 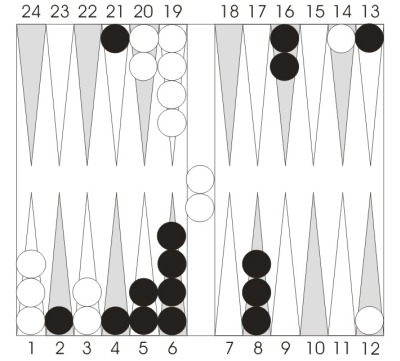 Black breaks his prime to put two checkers in the air! An amazing idea. On a second look, the move is actually quite logical, although most players would not even consider it.

Basically, Trabolt’s play eliminates the unfavorable variations where White makes three back game points, while retaining an edge in all other variations. A brilliant insight, and one of the best positional plays of the entire tournament. Trabolt went on to win the match and eventually, the consolation event.

Introduction to Chouettes A chouette is a fun, social, multiplayer form of backgammon. It can be a tremendous amount of... read more

The Best Way to Learn and Improve Your Backgammon Game

by Phil Simborg I am writing this article to share with you what I believe to be the best way... read more

Clocks in Backgammon There has been much discussion about the use of clocks at backgammon tournaments on the bulletin board,... read more

His real name is Matvey Natanzon, but no one called him that. Even his mother called him Mike. Falafel... read more